So, goodbye, Alford House Youth Club, Vauxhall. It’s been emotional. (Yes, this is where we’ve been rehearsing for the last eight weeks but we’ve had to keep this a secret lest we be besieged by ravening members of Robbie Sheehan’s fan base.) And hello, Rose Theatre, Kingston.

We’re now into the final furlong with merely hours to go before the tech: a time of dishevelled hysteria dressed up to look like polite anxiety in an office skirt. Ten days ago we started running the plays. Or at least one half at a time. This, after a lengthy period immediately beforehand coaxing items of stage furniture on & off stage between scenes in order to get our transitions right. Next, we spent last weekend being chased around the rehearsal room by a bunch of strangers, a body of men and women we shall herein term ‘the community chorus’. And finally, this week, we’ve been running these mutant theatrical war-beasts in their entirety, amongst costume fittings, fight calls & notes sessions from Trevor that go on longer than the Lancastrian family tree itself.

So, transitions: a general flavour of this exercise can be captured by imagining some gently sweaty yet determined stage-managers purposefully transporting an occasional throne from one end of a dusty rehearsal room to the other. They do this whilst skirting round various actors clustered onstage, listless & hesitant as if dangling from strings, grasping wrong ends of benches/swords/other actors & asking politely of no-one in particular: “Sorry, erm, where should I … erm …?” Meanwhile, more of the cast are seated round the edge of the performance space staring pleadingly into their scripts as if somehow said scripts can provide the answer to any number of knotty theatrical riddles: do I enter upstage left or downstage left? What bloody character am I playing in this bit? Is Jeremy Corbyn such a good idea after all? Meanwhile, a world-renowned theatre director in a blue denim shirt and pointy beard mutters occasionally in a corner: “No, that’s not going to work – hopeless.”

Everyone has a basic idea what they’re supposed to be doing, but not necessarily when or in what order. The result is subdued chaos. In occasional iambic pentameter.

By the way, I bally well worship stage managers. They are the rocks to which we flailing actors cling in a storm. Specifically, the rocks in this particular nine hour Shakespearean typhoon, erm, well, rock. If the performers think they’ve got their work cut out on this thing, then stage management have their work baked into jagged pieces and forced down their throat every night whilst doing algebraic equations in Latin. And for an actor like me, likely to get lost on his way from dressing room to stage ultimately to end up in Cleveland, à la Spinal Tap, they’re as indispensable as a care assistant to an imbecile. So, all hail Roger, Erin, Naomi, Ellie & Jack. This is for you, courtesy of Henry Rollins: 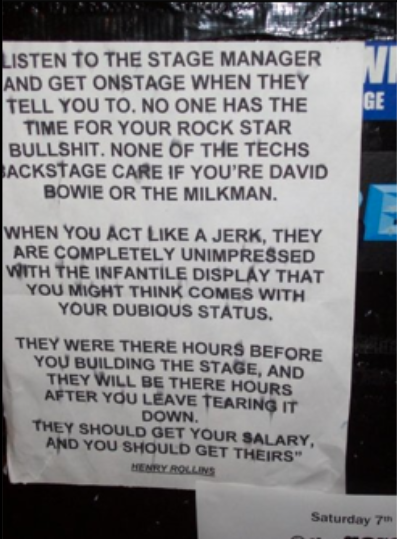 For me, a surprisingly salient item in our maelstrom of endeavour over these weeks has been the dreaded bench. Various pieces of furniture in these plays are required: thrones, coffins, tables, wheelchairs, camp-beds, stretchers; but it’s the bloody benches that seem to give me particular jip. A ‘council board’ is introduced as a concept towards the beginning of Henry VI, where England’s top brass sit at a table debating/voting/shouting at each other. And in order to gather round said table, one or two benches need to be hauled up close. And then sat on. With possibly a dangling sword to take into account whilst doing so. Or indeed a robe. Or indeed a pair of feet with a highly developed sense of their own autonomy.

Picture in your mind’s eye, if you will, a table with a bench before it. It is necessary to first step over the bench before one can sit on it. See what I mean? Thus, theatrically speaking, it’s a stroll in the (royal) park to stand proud and erect before a bench in readiness to be seated, nursing your two lines, looking frankly splendid, but a different set of cannon-balls entirely striding over it to actually sit on the bloody thing. Oh, the helpless, clattering indignity of it all. I fear for the previews.

Curiously, the benches in our production seem to be pieces of furniture exquisitely finely tuned to the physical profile of the actor attempting to use them. By way of example, if you’re Joely Richardson, say, and a magnificent thoroughbred race-horse, you can sit at this supposed council table as if breezily taking a fence at Haydock Park. If, on the other hand, you are me or Michael Xavier or Oliver Cotton, it is highly likely you will resemble three Sunday morning drunks in dressing gowns attempting to scale a garden shed.

I’m being terribly unfair to Michael Xavier and Olly Cotton, both of whom are well co-ordinated gents with luxurious hair. Michael in particular clearly spends his time away from rehearsals developing his body somewhere sweaty & beset with mirrors, as befits a bachelor in his thirties with a sideline in musicals. Built like a classic 1950s British saloon car updated by the Germans, he’s a terrific actor and a complete & utter delight. He puts me in mind of an old-fashioned English matinee idol. Debonair, elegant, occasionally naughty. A bit David Niven-ish.

His problem is, he’s been paired with me for most of the first half of Henry VI. The Earls of, respectively, Suffolk (him) and Somerset (me), spend the first half of the play picking flowers together in rose gardens, muttering in crowded rooms and playing with their pet hawks. (The Earls are clearly an item.) And, frankly, I’m doing my best to bring him down to my level.

Now, when it comes to colliding with actors, upstaging oneself & dressing as if dragged through a charity shop backwards (when out of costume), it’s a level I’m proud to have made all my very own. If you’re even remotely in my slipstream in these plays, the two (ahem, nine) hour traffic of our stage is liable to become a major theatrical pile-up. Which is unfortunate for Michael: I bet he’s accustomed to gliding serenely round a stage like 007 in a casino. Unfortunately, whilst we mouth at each other in the wings frantically attempting to establish at what bloody point in the dialogue we enter this next sodding scene and from which cocking entrance, he bears a closer resemblance to a rather dapper Stan Laurel to my hairy, unkempt Oliver Hardy. I’m afraid I often notice him quietly breathing a sigh of relief once the Earl of Somerset buggers off to France, leaving him free to elegantly snog the face off Margaret of Anjou unencumbered by the clueless idiot in the shorts.

Last Saturday, we slotted our community chorus into the production. These are a troupe of hardy souls who will be soldiers and citizens standing on ramparts or swarming across the stage, bellowing like a herd of zombies in a Danny Boyle horror movie. They gathered in the rehearsal room at the crack of dawn eagerly brandishing their notebooks, preparing to lay down their weekend for us all. But, Jesus God, this was a hard day.

Over the ensuing ten hours, Trevor stood before us all like Wellington at Waterloo, carefully placing his troops in meticulously plotted detail, a gruelling, exhausting campaign that had supernumeraries, stage management and actors wilting into their smartphones by close of business. Through it all, Trevor stood sentinel, energy and inventiveness never flagging for an instant, twinkling charm & good humour on legs, bustling round the rehearsal room, enthused and enthusing for ten hours solid. He is 75 years old. Extraordinary. The man’s a theatre machine.

His involvement with these plays is so complete, he is so alive and responsive to every line of text, his command of every nuance and dramatic inflection so awesomely assured, that the only explanation has to be that he spends every waking moment plotting, shaping, revising, tweaking, eating and shitting this damn stuff. Imogen Daines, our Joan of Arc and Lady Anne, happened to stumble across him during a lunch break splayed on his hands and knees, plotting a number of scenes on a piece of A4 paper, in the middle of the council estate playground a block away from the rehearsal rooms. As Imogen passed, he glanced up, smiled and said sweetly: “It’s the only place I can get any peace and quiet!”

One day, a young child from that estate will come across a fragment of Trevor Nunn’s indecipherable chalk jottings beside a municipal see-saw, and be inspired to follow a career on the British stage. Bringing theatre to the streets! Man the barricades.

Talking of which, Trevor told us a delightful anecdote about Judi Dench. When she was starring as the Countess Roussilon in Alls Well That Ends Well with the RSC in the West End a few years ago, she managed to do her opening scene, then sling on an overcoat, rush round the corner to Les Miserables at the Queens, sneak in through the back door, and appear as Madame Le Farge alongside the flag-waving chorus singing along at the back. After which, she would scurry back to the Gielgud to finish off her Countess. And here’s the proof! 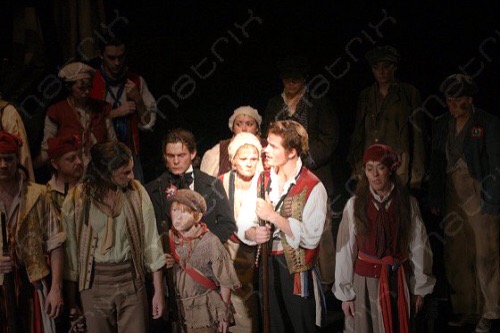 Oh, and whilst we’re on the subject of grandes dames of British theatre going undercover, following a staff shortage, Joely’s mum has offered to help out as a dresser on Wars of the Roses.* I understand the Rose management are looking over her CV. Will keep you posted.

5 thoughts on “Wars of the Roses: Warming the bench”