So, joy of joys, the venerable John Barton came to see Edward IV on Saturday afternoon. 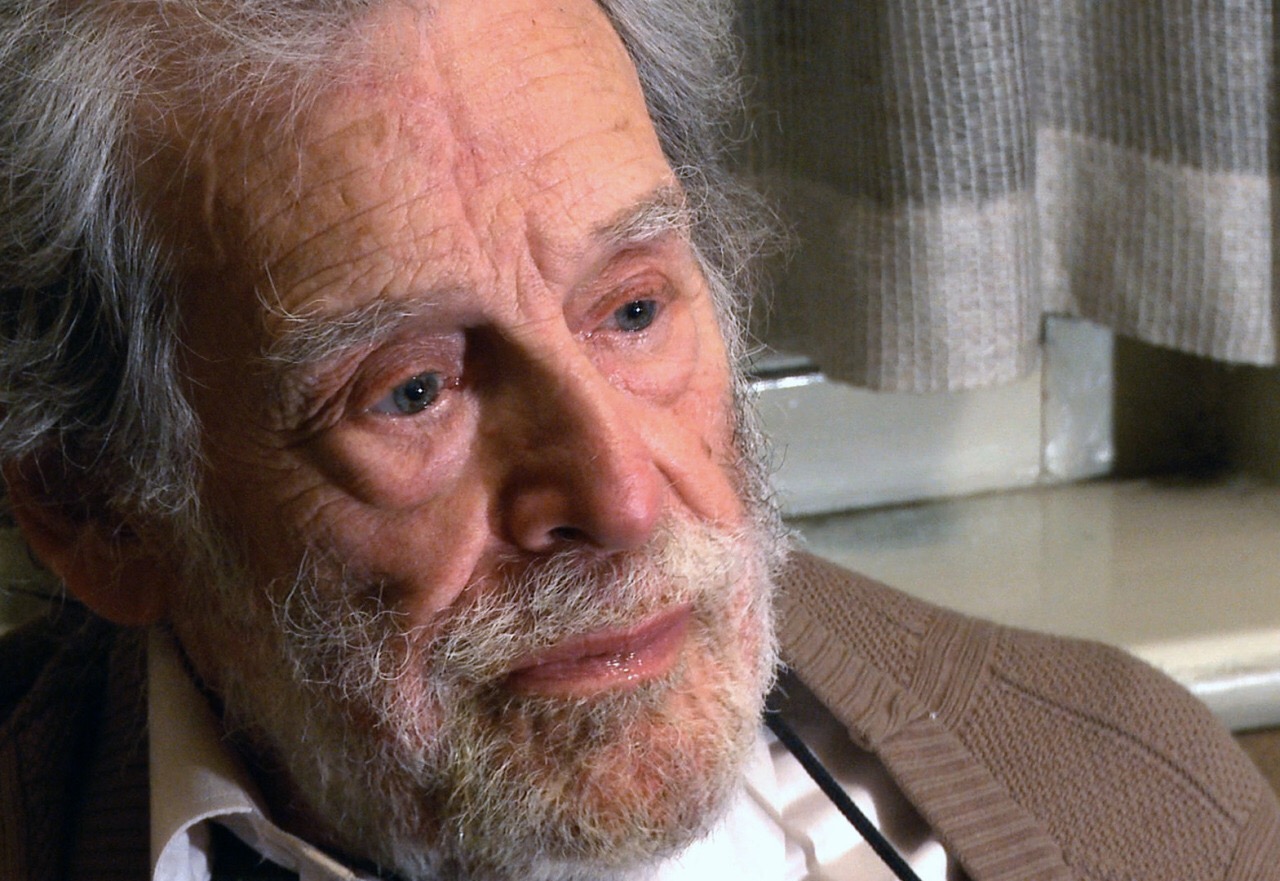 We first got wind of this when Cordelia, Trevor’s aide-de-camp, sent us all an email the day before, informing us of his impending visit. As far as advance warnings from visiting deities go, Cordelia is admittedly a couple of pay-grades below the angel Gabriel. (Mind you, she’s got better legs.) Nonetheless, a minor but palpable electric charge went through the company on receipt of her missive. Sweaty clutching of beads. A tweaking of collars.

To give you some context to our fraternal frisson: John Barton co-wrote Wars of the Roses. By which of course I don’t mean to suggest that, subsequent to a hung-over writing workshop with Thomas Nashe and William Shakespeare, it took him nearly four hundred years to settle down & get a decent literary agent. Rather that in 1963, he was the first person since the Victorian era not to be man-handled down a dark alley by the wider culture & given a bloody good hiding after adding his own text to a play written (mostly) by Shakespeare. 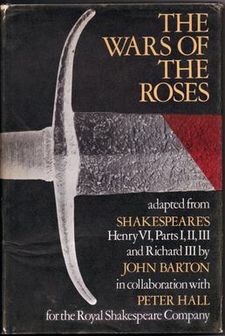 In the process, he (along with Peter Hall, some exceptional actors & a collection of cracking sword fights) put the original bloated and unkempt Henry VI trilogy on a strict diet, gave it a haircut and a swish pair of shoes, and then dragged it kicking & screaming into the spotlight of twentieth century critical and commercial appreciation. Rather like what happened to the Labour party in the 1990s. Oh yeah, and he also co-founded the RSC. And became a guru of classical verse-speaking to generations of actors & directors. A great big, revered, hairy Yoda in a cardigan. The ultimate Shakespearean authority he is.

To be honest, even if the actors hadn’t been faced with a wise old owl in a wheelchair sporting a monumental white beard and a halo of beatific calm on Saturday afternoon following the second show, we still would have felt like we were greeting God at Stage Door. And let’s face it, it’s the closest to Him most of this company are ever likely to get. 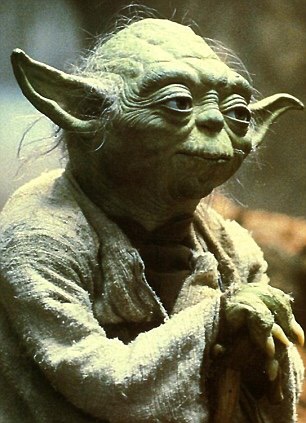 Barton clearly has a thing for monstrous theatrical endeavours: in 1980, he directed The Greeks, a cycle of plays based on the Oresteia legend that he co-adapted from Homer, Euripides, Aeschylus and Sophocles. It played in the same RSC London season as Trevor’s legendary production of Nicholas Nickleby, a mere stripling at eight-and-a-half hours. Not content with that, John came back twenty years later & finished off by using all the bits that he and everyone else had left out for his RSC co-production, directed by Peter Hall and son Edward, of Tantalus, in 2000, which turned into a nine-hour extravaganza of ten plays. Interestingly, it coincided with Michael Boyd’s tetralogy of Henry VI parts i, ii & iii, & Richard III, (ie: the baggy version of what we’re doing in Kingston right now), which eclipsed Tantalus somewhat by coming in at twelve hours over two days. (Jeez, people must have had whole acres of their weekend to burn prior to the Box-set.)

Sadly, he & Peter Hall never quite recovered from the epic row they had during the making of Tantalus. By all accounts, Hall balked at the length of it, and sliced one play off proceedings. Letters were written, sulks were maintained, and Barton ultimately boycotted the premiere in Denver. Well, I suppose if you’re going to mutually torpedo a fifty year working partnership, you may as well do it resurrecting the Trojan Wars. 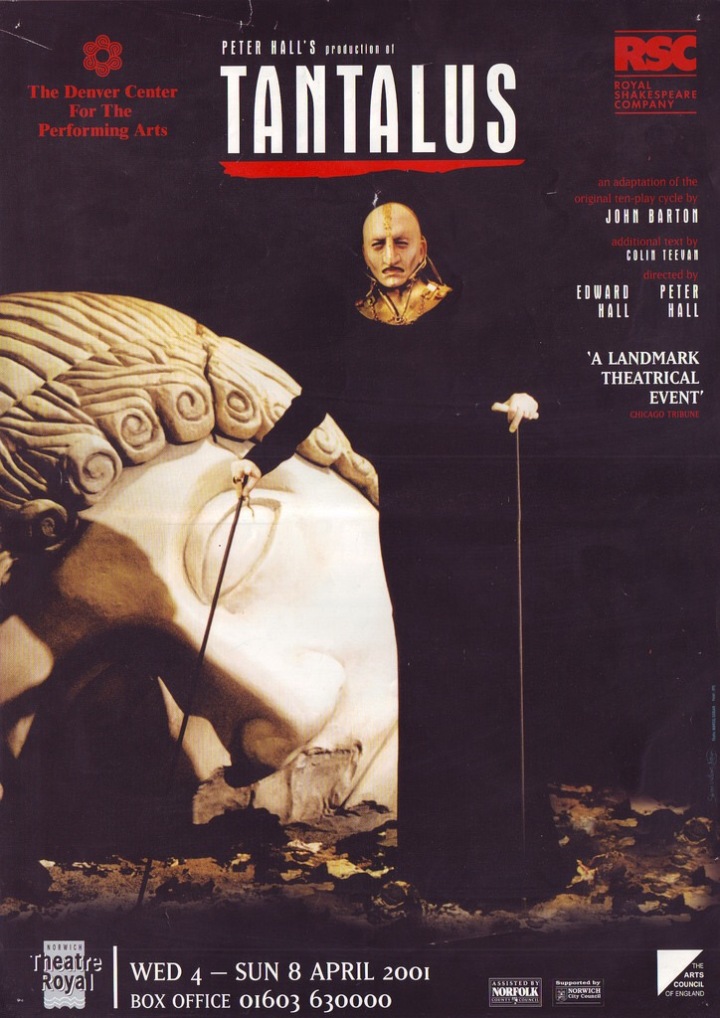 Barton was also responsible for a TV programme and book that became indispensable to a whole generation of drama students, aswell as a major hit with Joe Public. Called Playing Shakespeare, it was effectively John facilitating one long Shakespeare masterclass filmed for London Weekend Television with some top-rank classical actors like Patrick Stewart, Ian McKellen & Judi Dench. See here. 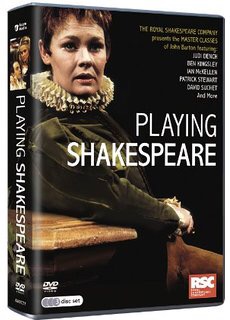 Filmed in 1982, it is delivered very much in the way British telly used to do this sort of stuff: that incredibly earnest hush of reverence the nation used to accord the High Priesthood of the classics, in their slacks, neck-ties and, um, gigantic cardigan. I love the way some of the actors are elegantly smoking as the camera lingers on them theatrically muttering Hamlet’s advice to the players, as if they’ve just swept in from the Ivy. It’s so adorably self-conscious. Nowadays you’d stick them in something glittery and revealing, put Simon Cowell in front of them with his sneer and ludicrous hair, then ask the viewers to vote one of them off. The very age and body of the time.

Nevertheless, in spite of its gloriously dated ambience, it is utterly bang on the money in its subject matter. It is thoroughly engrossing and sheds light on the text in a myriad of unexpected and wonderful ways. If you haven’t done Shakespeare for a while & you have a season at the RSC in the offing, watch one of these. At the very least, you’ll learn how to hold a fag properly. 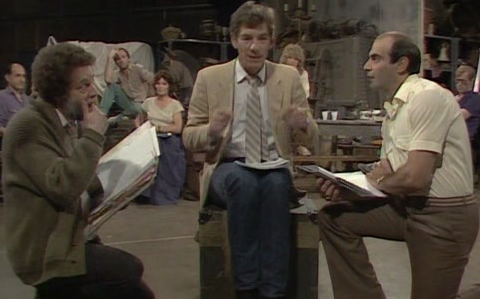 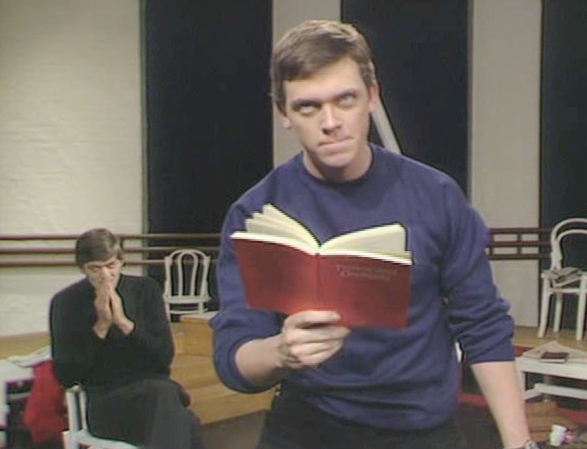 Another string to John’s bow, as ’twere, is his deep knowledge of medieval weaponry. Apparently, this is how Trevor first came across him – wielding a long-sword over a gaggle of quailing Cambridge undergraduates in a demonstration of stage combat. Indeed, all the weapons we use in our show are based on his original, very precise, specification back in the early 1960s.

When he was in his prime, Barton apparently chewed razor-blades to keep himself awake during rehearsals. (Crikey, was the acting that bad?) And once fell off-stage into the orchestra-pit in the middle of giving notes to the actors, before climbing out & continuing as if nothing remotely untoward had occurred. Now that’s what I call focus. 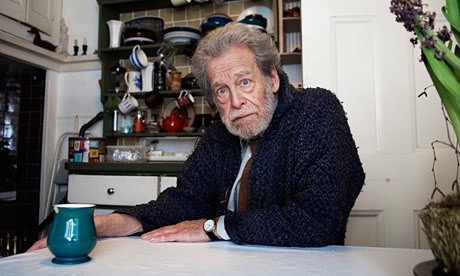 He’s in failing health now, and requires a full-time carer. However, beneath the rheumy eyes and bent, incapacitated body, a mind as sharp as a blade still operates, so Trevor assures us. I understand said carer failed to show up on the Saturday morning of John’s visit to the Rose – due, no doubt, to some dastardly government cut. Which meant that John’s sister was required to attend on him throughout the day. It also meant that they arrived late. The actors’ slightly strained public chat onstage whilst some monks chant some plainsong in the background at the top of the show became ever more stilted & desperate as the minutes ticked by. In the end, with the Sword of Damocles hanging over our tea-break, an executive decision was made to commence, and the show sadly started without John. However, nil desperandum: he made it in time to catch the start of the third scene. As the nation totters and the people revolt, Jack Cade finally had something to scare the shit out of the ruling class, as John & his wheelchair trundled into the auditorium bringing up the rear, following behind the baying mob like Davros before a horde of medieval cockney Daleks.

So *sigh of relief* he got to see my sword-fight with Robbie. And anyway, I don’t suppose he’d ever have a problem picking up the plot.

It fell to Alex Waldemann to honour  him at the curtain call with a beautiful speech paying tribute to one of the most inspirational figures in British theatre of the last fifty years. Unfortunately, at this precise moment, John and his sister had their heads near the floor attempting to do up his shoe-laces. I understand they’d both been engrossed by a particularly troublesome knot for a good while before Alex began speaking. Alex himself, unable to see whom he was addressing, delivered much of his speech to a man in front of them some way to the left. It became quickly clear to Cordelia that a) John was at risk of missing the entire tribute, and b) the hundreds of eager and slightly puzzled faces turned in their general direction had mistaken the fabled director for the small gentleman in tweed and glasses in the third row.

Cordelia began remonstrating with brother and sister Barton to temporarily abandon John’s shoes and claim their moment – to little avail: as Alex’s gorgeously improvised encomium intensified in emotion around them, Cordelia was reduced to frantically pointing at the Bartons for Alex’s benefit like an air traffic controller on speed, whilst simultaneously hissing down at the mumbling wispy-haired heads beneath her :

“Look up. Look up, for Gods sake! Stop it with the bloody shoe-lace. LOOK UP!”

John and his sister gradually came up for air and looked around, slightly non-plussed, not completely sure why everyone was looking at a small man in tweed in the third row.

In time, the enormous theatrical penny dropped for all parties, and as Alex swept along to his rousing crescendo, cast and audience turned as one body to a beaming Barton and gave a rapturous roar of approval. A genuinely wonderful and emotional moment for everyone.

So, a breathtaking masterclass in exquisite self-effacement from the great sage and teacher, wizard of verse, man behind the curtain showing us all how to avoid the limelight and stay true to the spirit of art. Or a man who hates to see his shoe-laces undone. You decide.

God moves in mysterious ways indeed. Thankyou, John. We owe you so, so much.